On 30 January 1975 the Faroe Islands was granted postal independence from Denmark. To mark this day Faroe Islands issued a large set of fourteen stamps. Eleven of these stamps were engraved by Czeslaw Slania. I studied the first seven stamps of this set in a previous blog - click HERE. In this blog I shall study Slania's final four stamps in this set. These four stamps comprise two different designs.

The subject of the first design has given me a bit of a challenge. The Heindorffhus site (which is fantastic) states that the subject of this stamp was based on a painting by Eyvindur Mohr, and it depicts a view from the island of Vidoy. I then checked my Scott catalogue to see if there was any more info on the image. Well, the Scott catalogue tells a different story. It says that the stamp depicts a scene from Sandoy Island. Which was correct? In an attempt to discover the answer I studied some photos from both islands on the net. And I think I found a photo that provides an answer.

First let's take a look at the stamp design in question. As mentioned above, this design was used for two values: the 200o (as pictured below) and the 70o. This design is an absolute stunner! 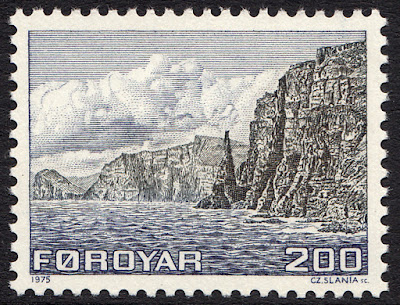 But which island does it depict? Well, I managed to find a photo in which I can pinpoint the same landmarks as in the stamp. 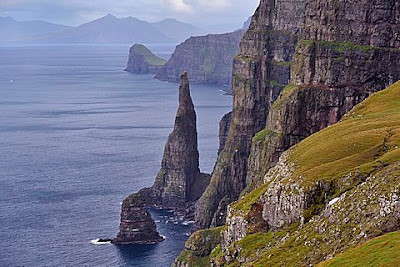 As you can see the coastline matches almost perfectly. So where is it? This image depicts the west coast of Sandoy Island.


The second design, according to the heindorffhus site, is apparently a view of Svinoy, taken from a photograph by Ásmundur Poulsen. This design was used for two values: the 250o and the 300o (as pictured below). Because I had to question the subject of the first design, I also wanted to check the information on this design to make sure it was right. 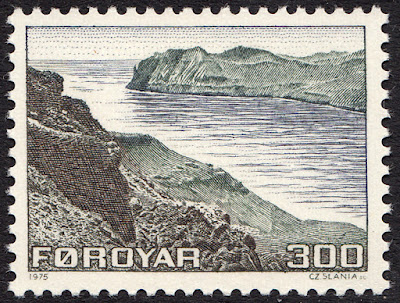 Again, I think this is possibly the wrong location. According to the Scott catalogue this is a view looking from the island of Streymoy towards the island of Vagar. And I found an image that confirms this. 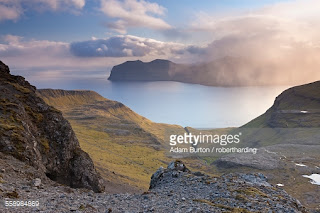 This shot was apparently taken from Streymoy Island looking toward Vagar Island.


At this point I have to say that this blog was in no way meant to discredit the wonderful Heindorffhus site. I was merely pointing out that we always need to be vigilant and do our own research. I love the Heindorffhus site and I use it all the time! And, who knows, my info could be incorrect!

One final thought before I say goodbye for today. While researching the Faroes, I have to say I fell in love with the place. The landscapes are truly breathtaking! If you have a bit of time type Faroe Islands into your browser and feast your eyes on some of the glorious landscape images out there. I'd love to visit this place one day!